A study of the evolution and habits of invertebrates, it was the fifth of Attenborough’s specialised surveys following his major trilogy that began with Life on Earth. Each of the five 50-minute episodes looks at a group (or aspect) of the creatures using innovative photographic techniques.

01. Invasion of the Land

Broadcast 23 November 2005, the first episode tells how invertebrates became the first creatures of any kind to colonise dry land. Their forerunners were shelled and segmented sea creatures that existed 400 million years ago. Some of them ventured out of the water to lay their eggs in safety, and Attenborough compares those first steps with today’s mass spawning of horseshoe crabs off the Atlantic coast of North America. Some animals abandoned the oceans altogether when the land became green with algae, mosses and liverworts. The earliest ground-dwellers were millipedes, which were quickly followed by other species. Springtails are shown to be smaller than the head of a pin and, for their size, can jump immense heights. The velvet worm hunts nocturnally and has scarcely changed over millennia, while the giant centipede can kill instantly and is shown hunting bats in Venezuela. Mating habits are explored, including the unusual ritual of leopard slugs and the meticulous nest maintenance of the harvestman. The arrival of earthworms was of great importance since they changed the nature of the soil, leading to a proliferation of plant life. Despite their aquatic ancestry, many invertebrates, particularly those with no exoskeleton, need a moist environment to keep themselves from drying out. Finally, a creature that has adapted to a desert habitat, the scorpion, is shown as it pursues its dangerous courting dance, followed by the birth of up to fifty individuals.

Broadcast 30 November 2005, the next programme deals with flying insects. It begins in Central Europe, where the Körös River plays host to millions of giant mayflies as they rise from their larval skins to mate. — the climax of their lives. Mayflies and dragonflies were among the first to take to the air about 320 million years ago, and fossils reveal that some were similar in size to a seagull. Damselflies are also looked at in detail. One species, the rare cascade damsel, inhabits waterfalls, while another, the helicopter damsel, lives away from water (unlike all the others in its group) and is also the biggest. Several types of butterfly are shown, but all have common habits, and Attenborough describes their physiology. Together with moths, they possess the largest wings, and this surface area gives ample opportunity to display for partners or warn off predators. In cold weather, bumblebees must warm themselves to prepare for flight: they ‘disable’ their wings, enabling them to exercise their muscles without taking off. The vestigial rear wings of flies and crane flies are used for navigation, and arguably the most accomplished insect aviator is the hoverfly, which makes continuous adjustments while in the air to remain stationary. Beetles that are capable of flight have to keep their wings below covers, and a specimen of the largest, the titan beetle, is shown. Attenborough attempts to entice a male cicada, only to have it land on his ear (causing laughter from the camera team).

Broadcast 7 December 2005, the third instalment examines the spiders and others that produce silk. Attenborough visits New Zealand’s Waitomo Caves, which are inhabited by fungus gnats whose illuminated larvae sit atop glistening, beaded filaments to lure their prey. The ability to spin silk developed early in the invertebrates’ history, being first used as an adhesive. The female lacewing still applies it in this way, to suspend its eggs from plant stems. Spiders first employed it as a sensitive trip line to detect movement, and Attenborough illustrates this by encouraging a trapdoor spider.

The speed with which it appears causes the presenter to jump in surprise. The webs spun by orb-weavers are complex and can comprise up to 60 metres of silk and 3,000 separate attachments. A time-lapse sequence reveals their intricate construction. The largest are made by Nephila and can be several metres across. The venomous redback spins three-dimensionally, and fixes vertical lines that suspend its unlucky meals in mid-air. Meanwhile, the bolas spider swings a length of silk with a sticky blob on the end, with which to snare passing moths. Argiope exemplifies the dangers of mating that are faced by some male spiders: unless they are careful, they can be consumed by the females. The courtship of the wolf spider, though less risky, is one of the more elaborate. Its nesting habits are discussed, along with the eventual birth of its young, which cling to their mother’s back.

Broadcast 14 December 2005, the penultimate episode focuses on the relationships between invertebrates and plants or other animals. It begins with ants and aphids: the former ‘herd’ the latter and protect them in return for secreted honeydew. The activities of gall-inducing insects are described, using the example of the oak tree. Many plants recruit insects to aid pollination, offering nectar for doing so, and some predators have adopted camouflage to take advantage of this, such as the crab spider. Stick insects rely on ants to hide their eggs underground for them in safety. In the Californian desert, the blister beetle’s larvae congregate on a stem and, by releasing a pheromone, attract a male digger bee on the lookout for a female. They climb aboard their visitor and eventually transfer to its mate, which will in turn unwittingly deposit them in its nest — providing sustenance. An orchard spider is shown enduring a parasitic wasp grub, which injects its host with a hormone that deranges it and halts the spinning of webs. The grub then sucks the liquid from the spider’s body and uses the remaining silk to form its cocoon. Fairy wasps are so small that they can lay their eggs inside those of water beetles — and can even mate while inside them. The tiger beetle larva ambushes ants by plugging its burrow with its head and pouncing. However, this doesn’t work with Methocha, an ant-like wasp, which avoids the jaws of the beetle larva, paralyses it with a sting, and lays its eggs on the host. After dragging the paralysed larva deeper into the burrow, the entrance is carefully plugged and concealed. Ants defend their colonies fiercely; however Alcon blue butterflies manage to get their young inside the ants’ nests by giving their young a scent exactly like that of the ant larvae; as a result the caterpillars are treated as if they were in fact ant larvae. However, this strategy is not flawless. Ichneumon wasps break into the ant colonies and release chemicals that make the ant guardians attack each other; the wasp then injects two of her eggs into the butterfly caterpillars. However, the ants seem to save at least one caterpillar as one of the pupae is later shown hatching into an adult Alcon blue butterfly.

Broadcast 21 December 2005, the final programme looks at the superorganisms formed by bees, ants and termites. Attenborough reveals that their colonies, whose individuals were once considered purely servile, are “full of conflict, power struggles and mutinies.” They evolved when such creatures moved away from a solitary existence and started building nests side-by-side, which led to a collective approach to caring for their young. There are about 20,000 species of bee, and a queen bumblebee is shown starting a new nest. As it grows, the inhabitants all help to maintain it and bring nectar and pollen. However, anarchy erupts when the queen starts to destroy eggs laid by her workers: she is stung to death and the colony ends. Ants live in bigger societies, which can make them vulnerable, but Attenborough goads a nest of wood ants into demonstrating their defence: formic acid. In Australia, a nest in a mangrove swamp has to be continuously rearranged to escape the tides. Meanwhile, desert-dwelling harvester ants block up nearby nests in an effort to maximise their food pickings. A bivouac of army ants is explored: they prove to be one of those most regimented organisms, where the action of each individual is for the good of the million-strong colony. Attenborough investigates magnetic termites, whose slab-like mounds are all aligned to account for the movement of the Sun. Finally, a full-scale battle between termites and matabele ants is depicted in close-up. 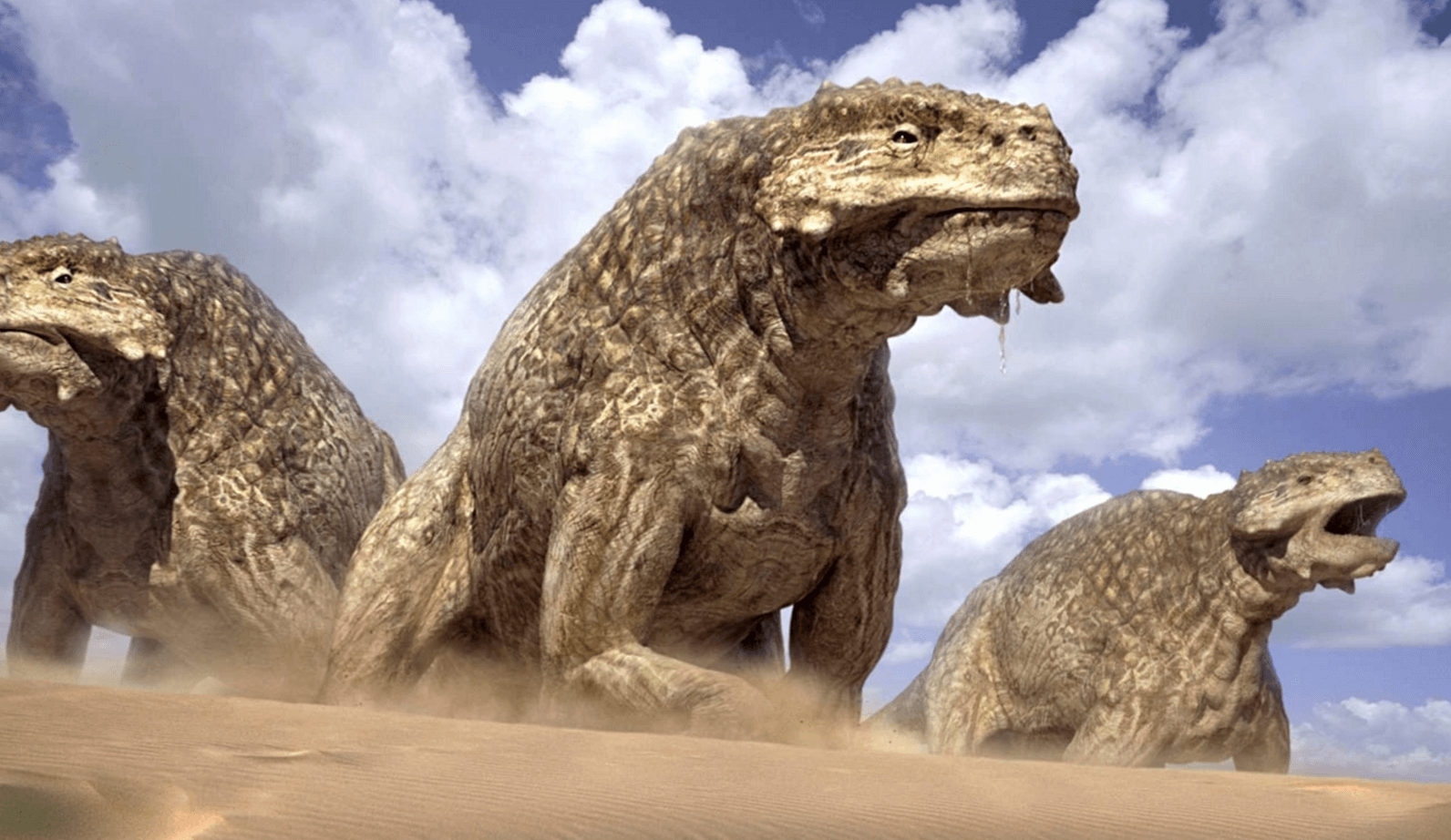