Climate change and rising sea levels mean the island nation of Kiribati in the South Pacific is at risk of disappearing into the sea.

But the island’s inhabitants aren’t giving up. They are doing what they can to save their island from inundation. Can COP23 help make a difference?

UN estimates indicate that Kiribati could disappear in just 30 or 40 years. That’s because the average elevation is less than two meters above sea level. And some of the knock-on effects of climate change have made the situation more difficult. Kiribati can hardly be surpassed in terms of charm and natural beauty. There are 33 atolls and one reef island – spread out over an area of 3.5 million square kilometers. All have white, sandy beaches and blue lagoons. Kiribati is the world’s largest state that consists exclusively of atolls. A local resident named Kaboua points to the empty, barren land around him and says, “There used to be a large village here with 70 families.” But these days, this land is only accessible at low tide. At high tide, it’s all under water. Kaboua says that sea levels are rising all the time, and swallowing up the land. That’s why many people here build walls made of stone and driftwood, or sand or rubbish. But these barriers won’t stand up to the increasing number of storm surges. Others are trying to protect against coastal erosion by planting mangrove shrubs or small trees. But another local resident, Vasiti Tebamare, remains optimistic. She works for KiriCAN, an environmental organization. Vasiti says: “The industrialized countries — the United States, China, and Europe — use fossil fuels for their own ends. But what about us?” Kiribati’s government has even bought land on an island in Fiji, so it can evacuate its people in an emergency. But Vasiti and most of the other residents don’t want to leave. 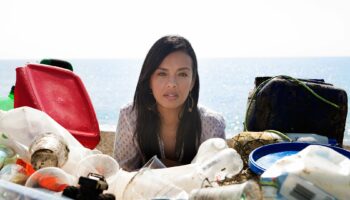