Cinema has long had an interest in the might and majesty of the open sea. From Jacques Cousteau’s Oscar-winning features The Silent World and World Without Sun to Luc Besson’s bends-inducingAtlantis, the big screen is the natural place to document the wide expanses of the high seas.

Deep Blue is every bit the equal of its acclaimed forerunners. Effectively a compilation of the most memorable and dramatic moments from the acclaimed BBC series ‘The Blue Planet’, Andy Byatt and Alastair Fothergill’s film marries the vigour of an action film with the sweep of epic cinema.

All ocean life is here, from dolphin and shark to shrimp and penguin, from the beasts that live on the very fringes of the sea to the monsters that can be only found in the sunless fathoms. And while many of the animals here are familiar, both the locations and the clarity of the camerawork represent foreign territory. This is literally as close as you will get to exploring the depths this side of stealing a submarine.

Deep Blue is a little let down by Michael Gambon’s narration, which is so sparse that one wonders why the directors didn’t do away with it altogether. Such a flaw is, however, but a drop in the ocean. Of course, those who remember the days when wildlife films were regularly shown before main features might feel a little nostalgic watching Deep Blue. This is no Disney-fied documentary, however. There’s no forced comedy or tortured melodrama. Instead, Byatt and Fothergill have simply recorded what they encountered while going where few men have gone before.

To say that the animals and incidents they encounter produce intense drama is like calling the Pacific a paddling pool. Indeed, this is a film that brings to life such boring Biology class topics as the food chain by slapping you right in the middle of a feeding frenzy. Bon appetit. 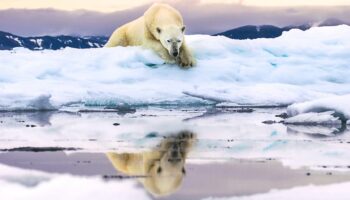